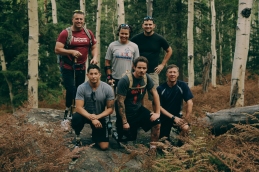 The Kilimanjaro Warriors went to Arizona the weekend of 13-16 September. Our goals for the trip were: 1. To bond as a team, 2. Push ourselves with consecutive hard, high altitude hikes, and 3. To test our equipment and the prosthetics. By all measures we had a very successful weekend. We accomplished three challenging hikes in three days, and felt sore, but very good each day. 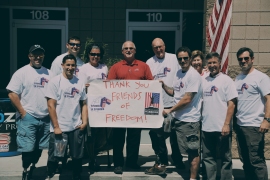 First a few shout outs to some groups who made this training weekend possible. American Airlines provided the air travel for six of us to fly into Phoenix. The Friends of Freedom foundation paid for our rental car and our lodging costs. The Arizona Army National Guard allowed us to use and stay at their facility near Flagstaff, Camp Navajo. Cabela’s provided us with hiking poles and backpacks, and Oakley provided us with sunglasses.

On day one we hiked on the Camp Navajo grounds up to a US Forest Service observation tower. We were able to hike about 3 miles that day which was a good warm up for us. We were also able to accomplish some elevation change going from about 7500ft to 8000ft and back.

As would be the case all weekend, our two Marines, Nick Perales and Erich Ellis, led the way to the top. We were rewarded with a great view of the surrounding Flagstaff area at the top of the observation tower.

The afternoon sun creating some long shadows as we worked our way back to our rooms on the first day.

Day two began with a large breakfast followed by long hike up Elden Peak. This was a very intense day that challenged the team, just what we needed. Of course everyone rose to the occasion and gave a maximum effort as we hiked for six hours that day. We covered five miles total and gained 2,000 ft in elevation as we went to the crest of Mt. Elden. 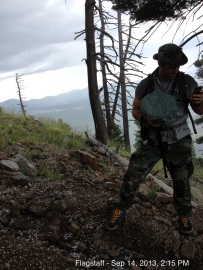 Along the way we encountered rain, hail, and lightning.
Here our Cameraman Bevan Bell is sheltering under some trees while we are getting pelted with pea size hail. The trip was also important for Bevan to meet and interview the climbers for a documentary he is filming. He also needed to test his equipment and his stamina as the high altitudes and temperature changes on Kilimanjaro will be a challenge for him to accomplish his mission.

The trail itself was very challenging and required us to be creative sometimes in maneuvering around the obstacles. We all helped each other out along the way. 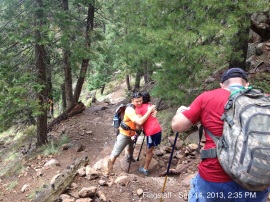 Joe Evans providing some reassurance to his wife Sarah along the way. The two are a great team together.

From the left, Steve Connolly, Erich Ellis, Steve Martin, Nick Perales, Joe Evans, Sarah Evans.
Along the trail, many hikers stopped to ask about us and were very supportive of our group and our expedition. 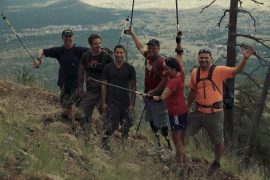 Exhilaration as we started to work our way down. However, many challenges still awaited us as the descent also proved to be difficult. We were all very tired after the hike up Elden Peak, and rested well that night. The next morning we gathered and checked in with each other to see how everyone felt. With great relief, everyone said they were doing well, just a little sore in a few places, but ready to move on with another challenging hike. 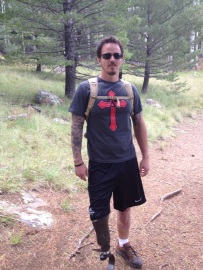 Erich Ellis, the most recent amputee of the group, but usually out in front on the trail. He is one tough Marine who has had numerous operations to recover from his injuries but never complains. He doesn’t know the word quit.

Sarah and Joe Evans always giving each other support.

On day three we hiked about three miles at an average elevation of about 10,000ft. We also encountered some challenging terrain. 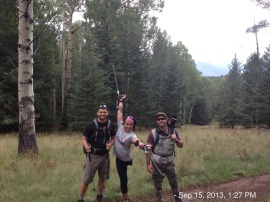 Day three was beautiful day. As you can see even though Sarah has to hike using her crutches, we couldn’t slow this warrior down, or break her spirit. She is truly an inspiration to all who come in contact with her. 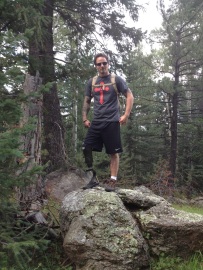 Erich Ellis, usually in the lead, scrambles on top of a rock to prove that this Marine can still take a hill if needed. When not charging ahead at full speed, Erich is usually making the group laugh.

Nick Perales, who is in phenomenal shape, decides to challenge some of the group with a few poses. He set the bar high as he searched for boulders on a cliff to prove his mettle. Sadly for Nick, he spent most of the weekend waiting for us to catch him along the trails. Nothing, not even injuries to both legs, can slow Nick down!

Nick is one tough Marine who knows no limitations. Don’t ever bet against him on a challenge.

Steve Martin decides that if Nick could do that pose, so could he. If you ever want to be inspired, spend some time around Steve Martin, he is an extremely motivational person. In four days he never complained once. He never looks for excuses, he just offers solutions to challenges. Numerous people asked about him along the trails, as he is a double amputee, and wanted to follow our expedition’s progress as they were impressed with his awesome abilities.

Sarah, of course, decides she can’t be outdone by the men.

Then she decides to one up everyone, as only Sarah can do. Talk about arm strength. Did we already mention that Sarah has to crutch up almost 20,000 ft when she tackles Mt. Kilimanjaro?

The group reached the top of Arizona, 11,500ft. Then, since everyone wasn’t ready to quit for the day, Nick challenged us to do calisthenics to test ourselves at high altitude. Since we couldn’t say no to Nick, we complied. 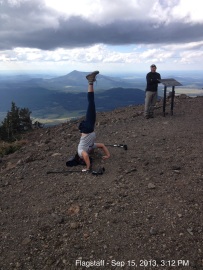 I would dare the Soviet judges not to give a perfect ten to these two gymnasts. Sarah and Nick, showing off.

Sarah and Steve Martin showing their enthusiasm as we ended day three. Catching air at 11,500 ft after three days of hiking and only one complete leg between the two of them!

The definition of determination is simply a picture 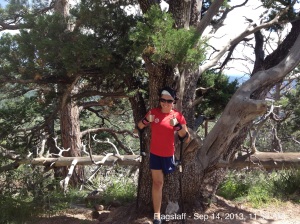 What an inspirational weekend!